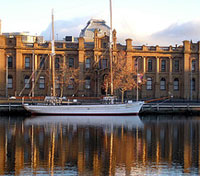 Hobart is the state capital and most populous city of the Australian island state of Tasmania. Founded in 1803 as a penal colony, it is one of Australia's oldest cities and the eleventh most populous, with a greater area population of approximately 205,566 in 2006. The city is the financial and administrative heart of Tasmania, and also serves as the home port for both Australian and French Antarctic operations. The Hobart nightlife primarily revolves around Salamanca Place and the waterfront area, but popular pubs, bars and nightclubs exist around the city as well.

View All Tours in Hobart