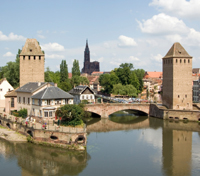 Alsace is located on France's eastern border and on the west bank of the upper Rhine adjacent to Germany and Switzerland. The political, economic and cultural capital as well as largest city of Alsace is Strasbourg. That town being the seat of dozens of international organizations and bodies, Alsace is politically one of the most important regions in the European Union. Having been early and always densely populated, Alsace is famous for its high number of picturesque villages, churches and castles and for the various beauties of its three main towns, in spite of severe destructions suffered throughout five centuries of wars between France and Germany. Alsace is furthermore famous for its vineyards ( Route des Vins d'Alsace from Marlenheim to Thann) and the Vosges mountains with their thick and green forests and picturesque lakes.

View All Tours in Alsace