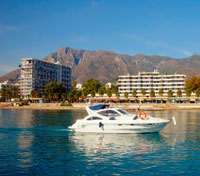 Marbella is the blue chip resort of Spain's Costa Del Sol. It's a holiday destination that retains much of the original charm that first brought people here in the early years of the 20th century. Modern Marbella was created by the efforts of Prince Alfonso von Hohenlohe who sought an exclusive Mediterranean retreat - in the company of his exclusive friends. The old town is changing though, as a process of "boutiquification" converts the old white-washed houses into galleries and chic clothing stores catering to the sophisticated tastes of international visitors. Yet there is still considerable charm to be found.