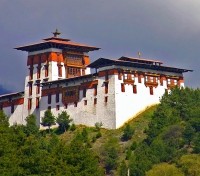 Bumthang or Jakar is a small town in the central-eastern region of Bhutan. It is the capital of Bumthang District and the location of the regional dzong - Jakar Dzong which is located on a ridge above the town. The town is the site of Chakhar Lhakhang, a small and unassuming temple which marks the site of the "iron palace" of Sindhu Raja, the Indian monarch who is believed to have first invited Guru Rinpoche to Bhutan. The current building is said to have been constructed by Terton Dorje Lingpa in the 14th century. There are many significant Buddhist sacred sites nearby the town, such as Kurjey Lhakhang, which holds a body print of Guru Rinpoche; Jambey Lhakhang, one of the 108 monasteries that in mythology were miraculously constructed by King Songten Gampo in one night; and Tamsshing Lhakhag established by Terton Padma Lingpa. In addition, one of the country's largest monastic colleges, Lhodrak Kharchhu Monastery, overlooks Jakar.

View All Tours in Bumthang