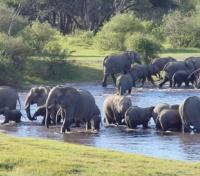 Hwange National Park(formerly Wankie) is the largest game reserve in Zimbabwe. The park lies in the west, on the main road between Bulawayo and the widely noted Victoria Falls.  The Park hosts 105 mammal species, including 19 large herbivores and eight large carnivores. All Zimbabwe's specially protected animals are to be found in Hwange and it is the only protected area where gemsbok and brown hyena occur in reasonable numbers. The population of African wild dogs to be found in Hwange is thought to be of one of the largest surviving groups in Africa today. The elephants of Hwange are world famous and the Park's elephant population is one of the largest in the world.