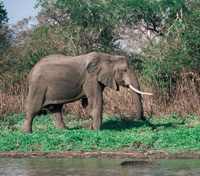 Only 200 km West of Dar es Salaam lies the mighty Selous Game Reserve, one of Africa’s least known yet wildest conservation areas. At an unbelievable 55,000 sq km Selous is almost twice the size of Belgium and four times larger than the famous Serengeti in the North, covering 5% of Tanzania’s land area. The Selous’ ecosystem as a whole is made up of a few conservation areas, namely Mikumi in the North and the Kilombero game controlled area in the West, covering in total over 90,000 sq km of pristine wilderness devoid of human influence. Fed by the mighty Rufiji River, the largest river in East Africa which drains most of South Western Tanzania’s water, this reserve is home to over 1,000,000 large animals and is home to over half of Tanzania’s elephant population. Selous is unique among reserves in Tanzania as it encompasses an area exclusively devoted to tourism in its Northern part, making up for about 10% of the reserve’s total size. Selous has over 2,100 species of plants, 350 species of birds, 60,000 elephant, 108,000 buffalos and an estimated 1,300 of the worlds’ approximately 4,000 remaining rare wild dogs giving guests an opportunity to glimpse all of these exotic animals in true unspoilt wilderness.

View All Tours in Selous