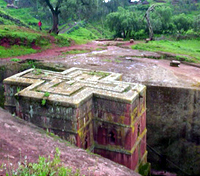 Lalibela is a town in northern Ethiopia. Lalibela is one of Ethiopia's holiest cities, second only to Aksum, and is a center of pilgrimage for much of the country. Unlike Aksum, the population of Lalibela is almost completely Ethiopian Orthodox Christian. Lalibela was intended to be a New Jerusalem in response to the capture of Jerusalem by Muslims. Famous around the world for its monolithic churches which set a benchmark for rock-cut architecture. There are 13 churches, assembled in four groups, most are thought to have been built during the 12th and 13th centuries.

View All Tours in Lalibela