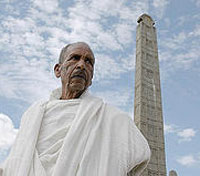 Axum, or Aksum, is a city in northern Ethiopia named after the Kingdom of Aksum, a naval and trading power that ruled from the region from 400 BC into the 10th century. It was the centre of the (eventual) Christian marine trading power the Aksumite Kingdom, which predated the earliest mentions in Roman era writings (around the time of the birth of Jesus). The Ethiopian Orthodox Church claims that the Church of Our Lady Mary of Zion in Aksum houses the Biblical Ark of the Covenant in which lies the Tablets of Law upon which the Ten Commandments are inscribed. This same church was the site Ethiopian emperors were crowned for centuries. Axum is considered the holiest city in Ethiopia and is an important destination of pilgrimages.

View All Tours in Axum