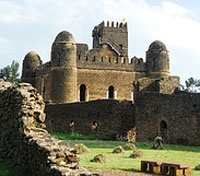 Gondar (Gonder) was once the old imperial capital and capital of the historic Begemder province, and is north of Lake Tana. During the seventeenth century, the city's population is estimated to have exceeded 60,000 and was the second largest city in the world. In 1678, the visiting Armenian bishop Hovannes remarked that the city was "twice as big as Istanbul".The most famous buildings in the city lie in the Royal Enclosure, which include Fasilides castle, Iyasu's Palace, Dawit's Hall, a banqueting hall, stables, Mentewab's Castle, a chancellery, library and three churches. Near the city lie Fasiladas' Bath, the Qusquam complex, built by Empress Mentewab; the eighteenth century Ras Mikael Sehul's Palace and the Debre Berhan Selassie Church.

View All Tours in Gondar