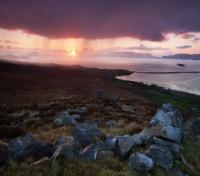 Westport (Irish: Cathair na Mart, meaning "city of the market", historically anglicised as Cahernamart) is a town in County Mayo, Ireland. It is situated on the west coast at the south-east corner of Clew Bay, an inlet of the Atlantic Ocean. Westport has a town centre designed by James Wyatt in 1780, in the Georgian architectural style. Its layout follows the medieval principles of urban design introduced by the Normans in the 13th century. The design for the town was commissioned by the Lord Sligo of the nearby stately home, Westport House, as a place for his workers and tenants to live. A particular feature is the incorporation of the river into the composition, contained for two blocks by low stone walls producing, on each side of the river, attractive tree lined promenades (The Mall) with several stone bridges over the river Carrow Beg. The layout further includes several tree lined streets, addressed by the narrow fronted commercial buildings typical of Irish towns, though with many here remaining of a singular refinement and charm. Some modern interventions, such as the Garda station, are less successful in maintaining the original continuity of the urban fabric. It was a residence of the pirate chief, Gráinne Ní Mháille, in the mid-to-late 16th century. The famous pilgrimage mountain of Croagh Patrick, known locally as "the Reek" lies some 10 km west of the town near the villages of Murrisk and Lecanvey. The mountain presents a striking backdrop to the town. The church on the summit can just be made out with the naked eye from Westport. Westport is a popular tourist destination and has won the Irish Tidy Towns Competition three times in 2001, 2006 and 2008.

View All Tours in Westport