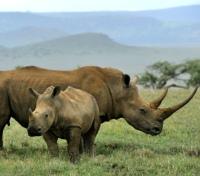 The Matthews Range, also known as the Lenkiyio Hills, is a range of mountains stretching 150 km long, oriented north-south, within the Laikipia district of the Rift Valley Province in northern Kenya. The town of Wamba is located at the southeastern edge of the range.  The highest point is Warges, at 2688m above sea level, at the southern end of the range, separated by a valley and the rest of the range. The 2375 metres high Ol Doinyo Lenkiyo mountain is the highest peak of the middle of the range. There is also a breast shaped hill locally known as the "Sweet Sixteen range."  The Matthews Mountain Range is located in Kenya's Northern Frontier and is one of the wildest areas in the country.  The only permanent river in the region is the Ewaso Ng'iro which overtime has cut deep, rugged gorges throughout the area mountains. This river is fed by the seasonal mountain streams
where indigenous flowering shrubs and prehistoric cycad palms flourish.  This diverse location boasts a combination of thick forested area's, crackled shrubed plains, and beautiful open clearings.  This area is quite isolated, and is home to elephants and other large mammals, and was known as the last places in northern Kenya to have wild Black Rhinos. It is believed the last Black Rhino in the Mathew's was poached out in the 1990s. The Mathew's are also home to the Samburu people. The mountain range is a sky island: surrounded by plains, with Ndoto Mountains to the north and the Karisia hills to the west. A number of the species in the Mathew's have evolved independently and the diversity of the forest is of great conservation value.

View All Tours in Matthews Range