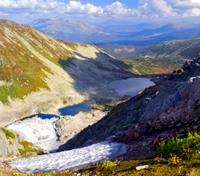 Siberia is the name given to the vast region constituting almost all of Northern Asia and for the most part currently serving as the massive central and eastern portion of the Russian Federation, having served in the same capacity previously for the USSR from its beginning, and the Russian Empire beginning in the 16th century. Geographically, it includes a large part of the Eurasian Steppe and extends eastward from the Ural Mountains to the watershed between Pacific and Arctic drainage basins, and southward from the Arctic Ocean to the hills of north-central Kazakhstan and the national borders of both Mongolia and China. It makes up about 77% of Russia's territory (13.1 million square kilometres), but only 26% of Russia's population (43.3 million people).

View All Tours in Siberia