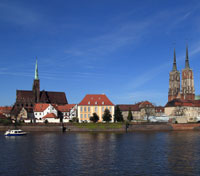 Wroclaw is the chief city of the historical region of Lower Silesia in south-western Poland, situated on the Oder river. Over the centuries the city has been part of Poland, Bohemia, Austria, Prussia, and Germany. In 1945, the Potsdam Agreement returned the city to Poland after many centuries. Wroclaw is now a unique European city of mixed heritage, with architecture influenced by Bohemian, Austrian, and Prussian traditions, such as Silesian Gothic and its Baroque style of court builders of Habsburg Austria. Wroclaw still has a number of buildings by eminent German modernist architects (Hans Poelzig, Max Berg), the famous Centennial Hall (Hala Stulecia or Jahrhunderthalle) by Berg (1911–1913) being one of its finest examples.

View All Tours in Wroclaw