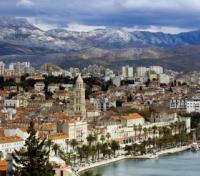 Split is the second-largest city in Croatia. It is a Mediterranean city, situated on a small peninsula on the eastern shores of the Adriatic Sea. Split is also one of the oldest cities in the area, dating more than 1700 years. Since 1979, the historic center of Split has been included in the UNESCO list of World Heritage Sites. The airport in Kaštela is the second largest in Croatia with services to Zagreb, London, Frankfurt and Cologne. The Split passenger seaport is the third busiest port in the Mediterranean, with daily coastal routes to Rijeka, Dubrovnik and Ancona in Italy. During the summer season Split is connected with other Italian cities as well, such as Pescara. Most of the central Dalmatian islands are only reachable via the Split harbour (with Jadrolinija and Split Tours ferries).

View All Tours in Split