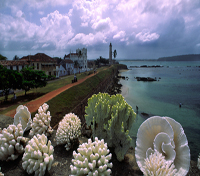 Galle is a town situated on the southwestern tip of Sri Lanka, 119 km from Colombo. Galle lies in Galle District. On 26 December 2004 the city was devastated by the massive Boxing Day Tsunami caused by the 2004 Indian Ocean earthquake that occurred a thousand miles away, off the coast of Indonesia. Thousands were killed in the city alone. Galle is the best example of a fortified city built by Europeans in south and southeast Asia, showing the interaction between European architectural styles and south Asian traditions. The Galle fort is a world heritage site and the largest remaining fortress in Asia built by European occupiers. Other prominent landmarks in Galle include St. Mary's Cathedral founded by Jesuit priests, one of the main Shiva temples on the island, and The Amangalla, a historic luxury hotel. Galle is the main town in the most southerly part of the island, with a population of around 100,000, and is connected by rail to Colombo and Matara. It is home to a cricket ground, the Galle International Stadium, rebuilt after the 2004 tsunami. Test matches resumed there on December 18, 2007. Rumassala Kanda is a large mound-like hill, which forms the eastern protective barrier to the Galle harbour. Local tradition associates this hill with some events of the Ramayana.

View All Tours in Galle